A vicious game of tag wreaks havoc on the Creek, claiming Kelsey as the next "it."

Craig packs his purse full of materials to build a boat for an event at the Creek, but one of his bottles gets out of his bag and hits Bernard, forcing Craig to go to Kelsey's house. When they enter, Kelsey makes Craig take off

his shoes and wait for Kelsey to finish reading a book. Craig looks at a picture of Kelsey and her dad. Kelsey thinks it's great not to have siblings, but then she grieves for not having anyone with her. Kelsey begins another narration sequence in her mind, saying that all of that is part of being a warrior. In the creek, Craig, Kelsey and J.P. prepare their boat made out of bottles to be part of a race of empty bottles. Just when it starts, Aaron arrives and another girl tags him back, so Aaron is now "it". Aaron tags Sailor Boy, and to stay behind saving Mortimor, Kelsey rushers back to the river, Kelsey is tagged by Sailor Boy and faints.

The next day, Craig tries to convince Kelsey that nothing bad is happening, and upon learning that Kelsey is "it" JP goes away, but Kelsey says she will not touch her friends. Kelsey, Craig, and J.P. go to the Trading Tree to find someone to tag There, J.P. trades some batteries for Spicy Beefers. They accidentally trip Bobby, spilling his candy, and offer to pick it up. Craig signals to Kelsey to tag him, but she refuses due to his vulnerability.

Suddenly Jason arrives and wants Kit to give him free chips, but she denies it and Jason looks for something to trade. Kelsey was going to tag Jason, but she takes too long and

Jason realizes it and tells everyone that Kelsey is "it" and all the kids run away.

Kelsey wants to find out if there is a way to end the game forever, and as no one knows,

they head to the Elder Rock. Craig asks them about the game, and Mark mentions that nobody knows who started it, and it's been in the creek longer than them. Kelsey says that she is it now, and the elders try to protect themselves, although Kelsey did not plan to touch them, but finish the game. Mark says that the game has no end, you can only touch another person. Craig and his friends go out and Kelsey is depressed because she will be alone

for life. JP thinks that Kelsey can touch a dog instead of a person. Kelsey thanks him but she believes that the solution is to leave the creek so that the game does not continue. That makes Craig sad and he hugs Kelsey, causing Craig to be "it" now. Craig has a hallucination and sees how the game started, a long time ago. Craig goes to the stump chair to prevent Kelsey from being it again.

Kelsey says that to end the game they must tag someone who hates the creek and is never there, and that gives Craig an idea. JP brings Bernard to the creek lying with which he could study there. Kelsey and Craig chase Bernard and he is finally tagged by Craig. Bernard says that all that was very dumb and leaves the creek, Craig tells everybody that "you're it" is finished and all the kids are happy, ending the episode. 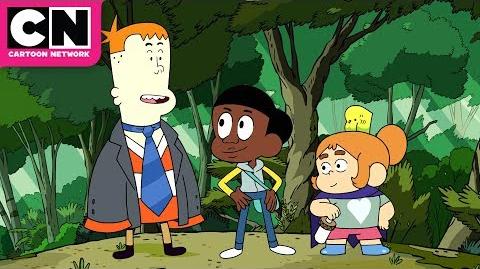 Craig of the Creek EPIC Game of Tag Cartoon Network