An encounter with Wildernessa, guardian of the wilderness, inspires Kelsey to take up a cause.[2]

The episode begins with Craig telling Kelsey and J.P. about a nightmare he had in which he could not find the stump. He gives his friends objects to cover their eyes and find out if they are able to find the stump without being able to see. When they start playing, J.P. touches a turtle and the kids keep it as a pet. While J.P. and Kelsey brainstorm names, eventually settling on "Tur-terror", Craig builds an enclosure for it out of branches and leaves, and adds a small pool. They put the turtle in the shelter, who hides in his shell out of fear. Craig thinks he liked it so much that he fell asleep, but Kelsey explains that the turtle fell asleep because he was bored.

Craig, Kelsey and J.P. go to the Trading Tree to buy a jar of used peanut butter, some cookies, and Craig buys some turtle toys although he almost forgets them. When they arrive at their place, they realize that the turtle escaped. When Kelsey wonders where she could have gone, Wildernessa appears, turtle in hand, with her Caucasian Shepherd Dog, Cheese Sticks. Kelsey gets angry and tries to fight with them so that Wildernessa gives her the turtle. However, the dog throws

the sword and stands over Kelsey, barking at her and pinning her to the ground with his breath. Kelsey demands that the turtle be returned, and Wildernessa explains that the village used to be a giant forest full of animals, but the suburbs arrived, expelling the animals, so that only the creek remains, where they can be free. Then Wildernessa leaves the turtle in the creek. Wildernessa shows up

and the boys too. Wildernessa gets mad at Craig because he knows nothing about animals, and says that Kelsey has a “special kinship” with them. Wildernessa leaves because "a squirrel needs her".

When Craig and J.P. play in the

creek, Kelsey is left contemplating nature and animals. J.P. throws a turtle to the tree and Craig climbs on his head to try to lower it. Kelsey notices a rabbit and in her mind she says that rabbits were the first mammals to have hair. When the toy falls on some leaves, Kelsey notices a spider's web with spiders and other insects, and exclaims "How beautiful!", Confusing J.P. When it's time to go home, Craig and J.P. race each other and Kelsey watches the dogs

locked in the gardens of the houses. At night, once Kelsey put Mortimor in his cage, she remembers what Wildernessa said and takes it out, besides that his eyes transform wild.

The next day, in the creek, Craig scratches J.P. with his staff, and Kelsey arrives, but she is wearing a different dress, which includes a cape and a crown made of leaves. Kelsey explains how Wildernessa changed her way of thinking, that animals should be free, and asks her friends to help free the animals. Craig believes that taking the dogs from their owners is a bad idea, but they decide keep the plan anyway. The trio hides in the bushes to think about what to do, and J.P. he decides to make noise in the neighborhood next to Craig to distract the owners of the dogs, and that Kelsey can open all the doors, and so the dogs escape to the forest.

Kelsey releases Mortimor to escape, but it turns out that he does not want to say goodbye to Kelsey. Craig hears noises coming from the Trading Tree. The trio goes there and finds out what happened. The dogs were making a mess, running up to people, and stealing their food. Kelsey scares some dogs that wanted to eat other smaller ones, and arrives Mortimor, that another dog also wants to eat it, so it goes back to Kelsey's head. The little dog was running towards the road and

was going to be run over, because Craig could not reach him. Wildernessa arrives and stops the dog from getting ran over. Craig grabs the dog and Wildernessa gets angry because he does not know anything about animals. Wildernessa arrives at the Trading Tree and Kelsey explains what happened, that she tried to free the dogs, but now they eat chocolate and run off into the street (which are two of J.P.'s favorite things).

Craig, Kelsey, and Wildernessa put peanut butter on their hands, and J.P. puts it all over his body, to attract the dogs and send them back to the houses where they belong. Kelsey asks if they will meet again with Wildernessa, and she replies with "when nature has taken suburbs and the creek runs red with the blood of humanity" and leaves. Kelsey thanks Mortimor for staying with her, and he returns to her head, ending the episode. 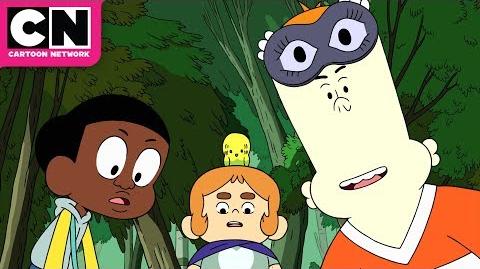 Craig of the Creek MISSING Tur-terror the Turtle Cartoon Network