Craig and his friends start a band, but Craig is haunted by a frightening nightmare.[1]

The episode begins in the trunk with Kelsey narrating the book "The Trials of Trebulon" to Craig and JP while listening to background music. JP says that Kelsey is

so good at telling stories that the music of the story can hear, Craig agrees with that and they both realize that the music is coming from outside. Both leave the stump and go to where the music comes from, but along the way, Craig crosses the abandoned barn with which he once had a nightmare. When they arrive at the house where the music comes from, they meet a group of 4 teenagers who make music, and when they finish the song, they applaud them. The members introduce themselves and tell them about their life. Craig, Kelsey and JP want to make a song, and the band members teach them how to do it. Daoud teaches JP to play the drums.

After a while of playing their instruments, JP mentions that they only need lyrics for their song and it will be a success. David says they are not necessary, but explains that they are to express feelings. An old man who lives in

the house faces a threat to call the police if they continue with their music, and the band members decide that will be all for the day. David tells Craig that he can carry his lyrics on Friday because they will have a concert. That night, Craig has the same nightmare as he enters the abandoned barn and a vulture that attacks him appears. The next day, Craig, Kelsey and J.P. appear in the garage and Craig mentions that he already has his letter, but David says that because of the old man in the house opposite they will no

longer be able to have concerts in the garage. Members say they need a new place similar to a garage, Craigs knows a place where the concert will be. They all agree the abandon barn will be having their next concert.

Later, a song begins and everyone is in charge of connecting their instruments, and at night, there are many people watching Mala Play while they play one of their songs. Craig, Kelsey and JP stay away from the barn because of Craig's fear, although he tells them they can go down. When they finish their song, David asks Craig to go up to the barn to play his song, and although Kelsey says it is not necessary to go, Craig wants to overcome his fear and goes to the barn.

While Craig, Kelsey and JP play their song, the vulture appears and addresses Craig, he goes backwards increasing the volume of his guitar. When they finish the song, everyone claps and celebrates, and the vulture hides in the attic of the barn. David asks Craig what they are going to call that place, Craig observes the vulture and answers "The Vulture's Nest". 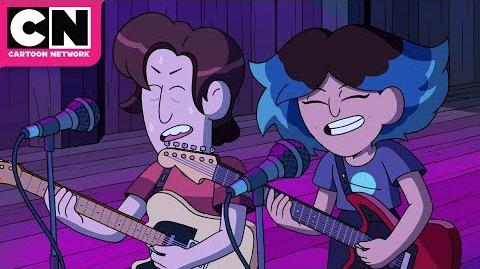 Craig of the Creek Playing in a Rock Band Cartoon Network