Hoping to fix the fort, Craig enlists the 10 Speeds for a ride to the legendary Junk Pile.[1]

The episode begins at a clothing store, with Craig and his mother. Craig goes inside a closet and finds a lock pin, and exclaims "Treasure!". Then a sequence is

shown in which Craig collects various objects he finds because he believes they are treasures. In Craig's room, Nicole enters and asks for her scarf, Craig says he did not see her and keeps drawing. Nicole opens the closet and many things fall that Craig collected. Nicole explains that she does an exercise she does with the children in her school, and tells her to think about whether she "wants" something or "needs" it. Craig says he needs all his things and Nicole tells him that she will throw everything out of his closet if he does not use it, and Craig keeps several things in his purse and goes to the creek. When Craig arrives at the creek, he finds out that Kelsey and JP They broke the "chair lift" they use to go down to the stump. Craig decides that they must visit the 10 Speeds, and the three go to Ramp City where they are.

When they arrive, the 10 Speeds were doing tricks with their bicycles,

and Craig, Kelsey and JP are presented with great poses. Craig asks Handlebarb where he can find a spare tire, and she explains that second-hand sales are scarce, so they will have to go to the Junk Pile. However, Handlebarb shows that it is far away and they will not be able to go. Craig repairs the broken tire of Handlebarb's

bicycle, then she decides that it will take them to the junk pile and everyone prepares to go. Craig goes on the bike with Handlebarb, although it is very heavy for carrying the treasures, and Kelsey goes in the head of JP, who goes on Todd's bike.

On their way to the junk pile,

they find a child trapped between the branches of a tree. The 10 Speeds do not want to help him, but Craig climbs the tree and makes him fall causing him to sneeze with pepper. For having saved him, the boy gives some acorns to Craig, and they resume their trip. When arriving at the Junk Pile, they find that the entrance is blocked and there are many helmets that say "10 Thieves" referring to the 10 Speeds. They get scared and leave,

leaving Craig, Kelsey and JP alone. Exploring for a moment, Craig finds several tires and tries to save one, but his bag runs out of space. Suddenly the Junk Lord appears and gets angry with them because his things are always stolen. Craig asks if they lend it to him, and the junk lord denies it. Then he explains that he sees value in the trash where nobody else sees it. The junk lord begins to chase them to remove Craig's things from his bag. After trying to escape, Craig gets into an old boat and loses sight of the junk lord, but he was in the same boat. Due to the weight of Craig and the junk lord together, the boat tilts down and is about to fall from a raised part. Craig begins to reflect on what his mother told him and throws several things. the boat is tilted down and is about to fall from an elevated part.

Taking advantage of the fact that they are lighter, the two jump from the boat and the boat falls and explodes. The junk lord admires Craig for his ability to throw things away, and explains that he has trouble getting rid of things, and allows Craig to take the tire. At that moment Kelsey and JP appear armed with things that they created collecting garbage, but quickly Craig explains that he let him take the tire, and also allows Kelsey to take a shield and JP a domino. Later, the three return to the creek and Craig repairs the pulley. Then Craig returns to his house, where his mother is using the computer. Craig shows his mother that he was left

alone with what he needs, and pulls out of his purse, his mother notices her old red scarf that she was looking for, although she already bought a new one, so she gives it to Craig. Craig puts on his mother's old scarf, and his mother saying "It does look good." and the episode ends. 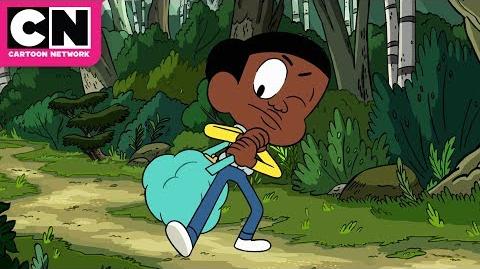 Craig of the Creek Meet the 10 Speeds Cartoon Network 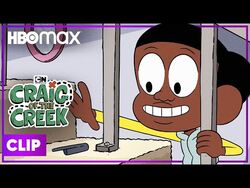