Craig of the Creek Wiki
Register
Don't have an account?
Sign In
Advertisement
in: Article stubs, Episodes, Season 1
English

Kelsey leads her friends on the most important quest ever; picking up takeout for dinner.

The episode starts with Craig and J.P entering Kelsey's house due to rainy weather. Kelsey's father instructs them to take their shoes off when entering.

When they go to Kelsey's room, Craig is impressed by the small library of books she has. She reveals that her mother, now deceased, gave them to her.

Shortly after, Kelsey's father groans out of frustration, prompting the kids to go downstairs and see what is happening. The roof has not been fixed, and gets his files wet. Because he must handle the leak, he cannot get dinner. He instructs Kelsey to get it by giving her twenty dollars.

First, they select the kind of food they want. Craig states that he does not care. However, he is unable to decide from five options that Kelsey presents. He does want pizza because he had pizza the previous night. He does not want chicken wings because it is too greasy. He does not want sandwich subs because he and his friends can make subs anytime. Kelsey decides to go with Thai food from I Larb Thai, given that she and her father order from the place all the time.

They must order by phone, much to Craig's concern. J.P. makes an order by impersonating an adult through using a deep voice and sitting on Kelsey's shoulders. The restaurant cannot do delivery due to the storm and can only do takeout. Before J.P. can cancel the order, Kelsey falls down and causes him to confirm the order.

The Stump Kids exit Kelsey's home and walk through the rainstorm to get the order. They go through Falling Branch Tree, slide down Mud Slide Mountain, and walk through Splash Alley before J.P. trips and gets his feet wet. As Craig takes out a dry pair of socks for him, the twenty dollar bill flies away to the other side of the road. They walk through the crosswalk to retrieve before the traffic resumes.

They enter I Larb Thai and get the order. However, the clerk knew that J.P. was impersonating an adult the entire time.

They return home, and as Craig and J.P. are setting the table, Kelsey realizes that they forgot the rice, and thus, her father will be unable to eat dinner without soaking up the spice. Nonetheless, Craig decides to make the rice for themselves. Kelsey however, is doubtful, until Craig convinces her that they can. They finish dinner when the rice is ready.

Kelsey's father enters the kitchen and sees that Kelsey and her friends got dinner. Thus, he is proud of their efforts and also gains respect for Craig and J.P. Afterwards, the episode concludes with Kelsey's father unable to handle the spice. 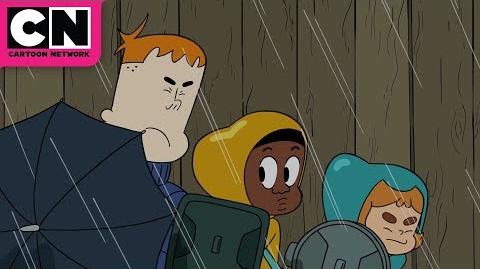 Craig of the Creek - The Epic Quest for Takeout - Cartoon Network