"The Mystery of the Timekeeper"

When the Time Keeper goes missing, Craig and his friends take up the task of helping kids get home in time for dinner.

The episode narrates the same scenario of kids playing at the Creek with the Timekeeper playing the sousaphone to notify everyone about dinner. On Sunday, however, Craig checks the time, only to notice that it's 6:30 PM. Craig alerts everyone that they're late for dinner, causing them to panic, much to the Timekeeper's horror. The next day, nobody's present at the Creek due to the incident that left them grounded.

The day after that, Craig, Kelsey, and J.P. start talking about their experiences while being grounded, and start wondering why the Timekeeper didn't play the tuba at the exact time. The trio decided to visit the Timekeeper in her tree fort, only for them to realize that she's gone. While they are searching in the Timekeeper's hangout area, Kelsey realized that the Timekeeper didn't set the time for daylight savings, so they were late last Friday. Craig discovers a juice box, and asks Kit if the Timekeeper traded in the Trading Tree, though she denies any occurrence of it. Craig thinks of someone filling up the Timekeeper's position, but due to pressure from his friends, he volunteers for the task.

As Craig becomes the timekeeper for the day, he notices the boredom the felt on the tree fort. Once he finishes notifying everyone about dinner, he informs Kelsey and J.P. about the things he missed throughout the day. Kelsey and J.P. start sharing interesting experiences they had throughout the day, which leaves Craig frustrated. The next day, J.P. is assigned as the timekeeper. Everything's fine until a fly comes in. J.P. attempts to swat it with his hands, but soon after, he starts hitting the container, unintentionally triggering the signal for dinner. Despite the time, everyone left the Creek. The next day, Kelsey is assigned as the timekeeper, and reads a book to pass her time. When it's time for dinner, Kelsey accidentally breaks the container, forcing her to run throughout the Creek to notify everyone. Unfortunately, some kids were not informed, hence they were grounded for one day. 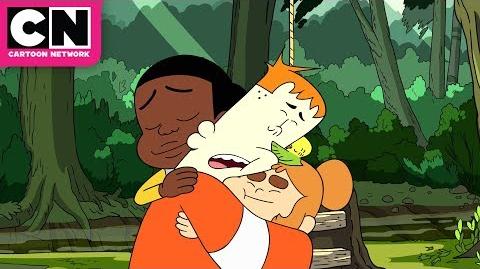 Craig of the Creek - The Missing Timekeeper - Cartoon Network

Retrieved from "https://craigofthecreek.fandom.com/wiki/The_Mystery_of_the_Timekeeper?oldid=35959"
Community content is available under CC-BY-SA unless otherwise noted.