The last book of Kelsey's favorite book series goes missing from the library, so Craig decides to help her solve the mystery of who took it.[1]

In the Stump, Kelsey finishes reading Ythrith of Scriggith: Tales of the Dragonmancer, the penultimate book in the Ythrith of Scriggith series. Craig and J.P. pull her up and they sprint to the Herkleston Library. Kelsey remarks that she returned the book with three days to spare, to J.P.'s dismay.

Kelsey tries to justify their hurry, explaining that she's excited to read the final book. She puts the book in the book drop after some struggle, They then enter the library and begin looking for more books. In the "Young Adults" section, Craig, Kelsey, and J.P. choose new books. Craig selects a detective novel called The Smarty Boys: The Case of the Missing Cardigan and begins to read aloud. Kelsey interrupts him, yelling "Oh no!" and "It has to be here. Where is it?!" Craig questions her, so she explains that the last book was nowhere to be found. Craig suggests they ask the librarian, Harold. Kelsey asks Harold about the book, and he says it was supposed to be returned 2 weeks ago, but never was, which makes Kelsey angry. Kelsey asks who took it, but Harold tells her he's not allowed to say. Craig tells Kelsey, taking advice from the book, that children solve cases better than the police, so they start an "investigation". Craig thinks they should find witnesses, so they search for Stacks, who they find in a room at the back of the library.

Already there, Kelsey and Stacks talk about the book. Kelsey mentions that she can not finish the book series because the last one is missing, and Stacks gets nervous. Trying to make Kelsey forget about the last book, she recommends another series of books called The Trebulon Trials, but Kelsey isn't interested in that genre.

Stacks tells Kelsey that the book has a child with a red turtle backpack, and Kelsey, Craig and J.P. come out of the library to keep looking. The three of them go to the stream and Craig finds a red backpack in the meadow, but when he enters there, he breaks a stick and makes the Horse Girls angry. When Mackenzie finds out that Craig broke her hurdle, she thinks about kicking him, but Kelsey just arrives and stops her.

Kelsey greets Maney and tells her that she is looking for a red turtle backpack, Maney says she saw one of the Ninja Kids use one, Kelsey gives her an apple for helping her. J.P. arrives at the meadow and upon seeing him, Maney falls in love with him.

Craig, Kelsey, and J.P. arrive at the waterfall, where they find the Ninja Kids, who proceed to throw cardboard shurikens at them. Kelsey sees that the leader of the group has a red turtle backpack and asks about the book, but she assures that she only has manga imported from Japan. Kelsey gets angry and starts a battle with the leader of the group, but after trying to climb a tree, Yustice falls and her backpack opens.

Kelsey sees that a red book appears but when Zatch, one of the ninjas, takes it out, it turns out to be a western comic, so Craig, Kelsey and J.P. retreat. When they walk by the creek, they notice Scooter Kid skateboarding with the red turtle backpack, so they chase her. J.P. is thrown on the road so that the girl stumbles and falls into a bush. However, when she opened her backpack, it is revealed that there is only one report made by Stacks, so they let the girl go. That night, after dinner, Craig continues reading his book. Bernard realizes that in those books, the culprit is always the first character, and he tells Craig. Before Craig goes to sleep, he finishes reading the book and learns Bernard was right. He remembers the people he had searched earlier that day.

The next day, they look for Stacks, because she was the first person they saw. After trying to deny it, without giving results, Stacks reveals that she hid the book under his chair. She says she hid it because if Kelsey finished that series of books, she would not have anyone to talk to about books anymore. When they leave the place, Kelsey says she will read the other saga that she recommended, The Trebulon Trials. This makes Stacks happy. Craig throws the book and falls on Harold, ending the episode. 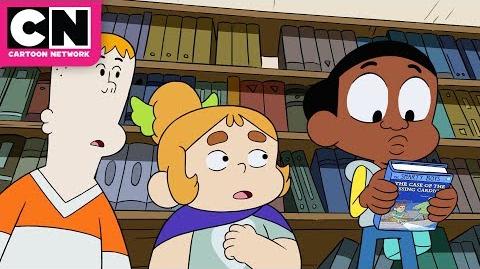 Craig of the Creek The Book Thief Cartoon Network