Craig's determination to get his granddad a cicada shell causes him, Kelsey and J.P. to become trapped in their stump.[1]

Earl explains cicadas to Craig through narration in a nature documentary-style, talking about their diet, life cycle, and 17-year reproductive cycle culminating in burrowing out of the ground and taking to the trees by the thousands.

Craig's grandpa offers him a cicada shell, but he holds it too close to Craig's face, causing him to slap it away, crushing it. They apologize to each other, and Craig promises to get him a new one. Earl tells Craig that the cicadas would be back soon. Cut to an unknown amount of time later, Craig, Kelsey, and J.P. are at the Creek getting swarmed by cicadas. They decide that they're only

chance of escape is the stump, and they jump in. Inside the stump, Craig apologizes for ruining the afternoon trying to find a replacement cicada shell for his grandpa and fantasizes about collecting so many as to be able to fill a bank vault full of them.

Craig reveals that he was able to grab a single shell, and they all express relief at their safety.

The shell begins to twitch, and a cicada emerges, causing J.P. to yell "Dracula!" due to him believing it to be a vampire. Kelsey, also believing it to be a vampire, draws her sword and prepares to destroy it, but Craig traps the cicada and the shell inside a jar. Craig soothes them, reminding Kelsey and J.P. that it's only a cicada, but grosses himself out with his description. Kelsey tells Mortimor to keep an eye on the cicada, but he gets spooked and flies back to Kelsey's head. J.P., believing the stump to no longer be safe, expresses the urgency of escaping. Craig comes up with the idea to use a message in a bottle to signal for help, and while Craig gets the tools necessary to send it out, J.P. promises a reward of ice cream to the rescuers. After sending the message off into the creek, Kelsey, to Mortimor's dismay, exaggerates his hunger as an excuse to eat their super-secret emergency rations. After they eat their rations except for the dried prunes, they notice Dracula has finished molting.

To pass the time, J.P. does a comedy routine impersonating the cicada, but the last joke about their current situation falls flat and reminds them of the seriousness of their situation. They then hear a voice and realize their message was received. Craig sees Jason, the Junior Forest Scout, who will only help them escape if he is given ice cream first. Craig is confused, but J.P. reveals that he promised the rescuer ice cream, and adds that he doesn't have it. Jason storms off, stealing some of their possessions before leaving. Having given up hope, Craig and Kelsey retreat into their sleeping bags as he laments how he ruined the day, but Kelsey and J.P. cheer him up by explaining that they still had a fun adventure. J.P. joins them in hiding in a sleeping bag as they feel sorry for Dracula, who spent 17 years underground only to be stuck underground with them. Inspired by the cicada, they leave in their sleeping bags, taking Dracula with them. They let him go, and take a group photo holding his shell, which Earl frames and places on his desk. 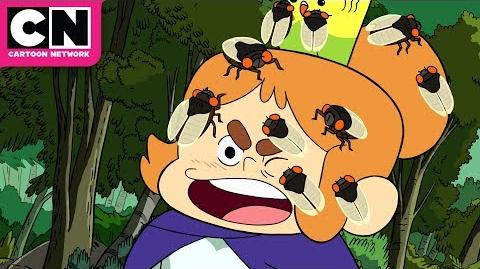 Craig Of The Creek Cicadas Swarm the Creek Cartoon Network