J.P. dirties his last clean clothes and he must wear his Sunday clothes to the creek.[2]

The episode begins with Craig, Kelsey Pokoly, and J.P. at the creek exclaiming that they have 8 full hours to be at the creek. J.P. states his plans: to touch a salamander for eight full hours. The salamander is clinging on the ledge of a bank, near a stream, then runs away once it notices J.P.

J.P. tumbles into the water, so Craig and Kelsey call out for him. He stands up soaking wet, and then exclaims that he has "wet" himself. He explains that he didn't "wet" wet himself, and remarks that it was okay, because his underwear wasn't wet. A few moments later he starts feeling his underwear getting soaked, and then awkwardly describes his experience. Craig and J.P. look at each other in concern and advise J.P. to go home and get changed.

At J.P.'s house, the three friends walk towards the door. Before they could open it, J.P's sister Laura explains

that he will not enter being dirty. J.P. then tries to take off his clothes, but Laura tells him not to, because their neighbors are often talking about him. She then tells J.P., someways he has gotten dirty. One of these, were J.P. arriving home, covered in bee-stings, and J.P. states that he did this because he thought the bees would make him fly. Laura talks to J.P. saying that he is in middle school and start being mature, and also tells him that his two friends, Craig, and Kelsey, are younger and are also clean.

J.P. dries himself with a towel and goes along with Craig and Kelsey to the room to get dressed, but discovers that Laura took all his laundry to wash them because they

were all dirty, but she won't wash them until she returns from work. Craig and Kelsey try to find clothes for JP. Since they can't find clothes, Craig thinks of a solution to hang out at JP's house. Suddenly JP remembers his "Sunday clothes", an elegant lilac suit with a bow-tie. They go back to The Creek, and JP dressed in his suit. JP shows up again, although Craig and Kelsey have already seen his suit. JP asks about the plan of the day, and Craig says he planned to look for golf balls to exchange at the Barter Tree, and the three are on their way to look for balls, but JP is careful not to get his suit dirty.

Suddenly they cross The Paintballers and dodge the shots, which came from Paintball Mike and his team. Mike appears angry and tells that the seventh graders, joined the first graders for battle, and they go

looking for them. The three go to a place where a man played golf, Kelsey scares him and the man throws the ball in the direction of the creek, and they go to pick it up, getting into the water with their clothes on. However, JP must stay outside and let Craig and Kelsey pick up the balls. JP begins to worry about not being able to sit down (since the stones have bird poop), and the trio goes with the golf balls to the barter tree. There, Craig exchanges the balls for 3 packages of cheese crackers, and at first, Kit confuses JP with a health inspector,

After eating the snacks, JP almost dirties the suit by wiping his fingers, Kelsey warns him and JP throws himself on the grass to clean his fingers, and then sits on the grass. But then you should get up to avoid staining the suit with the grass. JP covers his ears and starts humming and saying random phrases, to forget about his problems. Suddenly the two groups of Paintball arrive, released by Paintball Mike and Paintball Benny. Kit tries to separate them, but fails and they both begin to argue. Mike mentions "a kid wearing a suit that solves things" and Craig decides to bring JP to fix things. At first, he is not sure about negotiating a deal with the Paintballers, but decides to do so to be held accountable.

The two groups, Craig, Kelsey and JP meet on the battlefield to negotiate a deal. Mike starts talking and thinks that the first graders should leave, JP decides they definitely

leave, so Mike's group celebrates. Benny explains that he wants to use the first graders as human shields, and JP allows them, making Mike's group angry. Having no deal, JP writes the number "300" on paper and hands it to Mike, who looks confused. JP adds another "0" but in front of 300, leaving "0300", Mike is offended and both groups prepare for battle, with their leaders with weapons. JP says they shouldn't fight because they are brothers, and suggests that they think about how that silly battle began. Mike and Benny were close to shaking hands, like reconciliation, but JP remembers how the war started, Paintball Benny shot Paintball Mike in the "noo-noo" (likely his crotch). Paintball Mike's anger flares up again, and the war reactivates.

Craig, Kelsey and J.P. escape, the latter covering. A paint bomb falls and Kelsey tries to dodge it, but explodes anyway, bouncing Kelsey, and she falls on Craig and both fall into a kind of mud that makes them sink. J.P. runs to save them, but remembers his suit, and proceeds to explain that he was trying to be responsible all day. J.P. decides to undress and get into the mud to save Craig and Kelsey. Later they return to their homes, and despite having gotten into the mud, J.P. keeps the suit clean. Laura arrives and upon seeing him naked tells him that "Don't you dare tell me that you went out in your birthday suit again?" J.P. tells her that he wore his Sunday suit, concerning Laura, but she is quickly relieved when he shows her that the suit is intact. As she calls him "responsible", their neighbor Carol yells "Somebody put some clothes on that boy!", to which Laura responds by calling J.P.'s body "beautiful". 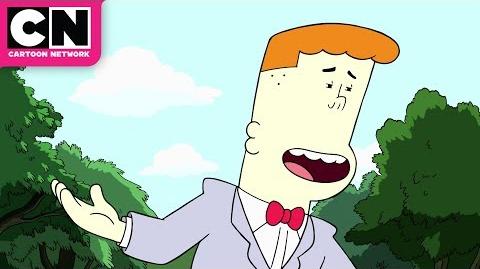 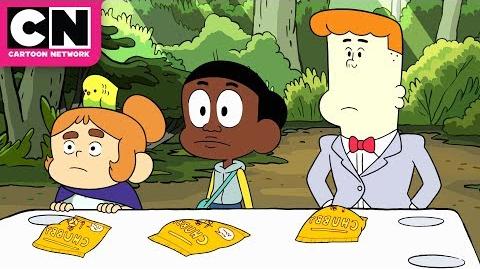 Craig of the Creek Stopping the Paintball War Cartoon Network