Craig of the Creek Wiki
Register
Don't have an account?
Sign In
Advertisement
in: Article stubs, Episodes, Season 2

Martin Ansolabehere (art)
"Memories of Bobby" is the 1st episode of the second season of Craig of the Creek and the 41st episode overall.

When a pillar of the creek community leaves, the trio mourns their loss by remembering the good times.

The episode begins with a "funeral" for Bobby, held by Priest Kid-- although it is made clear he's alive when he reaches down to grab a piece of candy that has fallen to the floor. Members of the audience cry, including Kit and J.P., of which Kit states he was "her best customer--he bought so much candy!" and J.P. bawling and saying he doesn't want Bobby to go. Kelsey and Craig end up having to drag J.P. over to Bobby for the candy offerings, and then away from Bobby afterwards.

When the Stump Kids return to their stump, J.P., in a bout of grief, stole Bobby's memorial photo from the funeral. They sit in silence and think of the memories they had with Bobby.

J.P. remembers meeting Bobby for the first time in the episode "You're It." However, Bobby trips and falls; thus, dropping his candy. More importantly, he has no significant role in the memory.

Afterwards, Craig remembers the time that they found the Palamander. When he, Kelsey, and J.P. attempt to kick a ball into space, they crash into each other. Shortly after, Craig finds a Palamander buried in the ground. He digs it up and when he activates it, the Palamander starts singing a song.

The Palamander sings its song twice before it starts to annoy them. Frustrated, Kelsey strikes it with her sword, but it starts singing at a lower pitch. Desperate to turn it off, Craig holds the Palamander by its neck and drowns it in the creek water, to which it stops singing. Afterwards, Craig digs a hole to bury it in, but Bobby runs across it and trips. Once again, he drops his candy.

Back in the present, Kelsey criticizes Craig's memory because Bobby has no important role in his story. Then, Kelsey retells her memory of Bobby. While she, Craig, and J.P. are about to go to the baby casino, Maney asks for their help. Mackenzie is trapped in quick mud and cannot escape. Initially, Kelsey is reluctant to save Mackenzie due to her rude remark towards her. However, she decides to help out regardless because if Mackenzie sinks, Maney will be upset. First, Kelsey throws a rope in her direction, but Mackenzie reminds her that horses do not have hands. When Craig and J.P. arrive on the scene, they bring their baby pacifiers with them. Kelsey realizes that she can use a baby pacifier to save Mackenzie, so she takes Craig's pacifier and successfully saves her. However, Bobby enters the scene and trips on the rope. Once again, he drops his candy.

Back in the present, Kelsey is criticized for her story because Bobby did not have a key role in the memory. Then, J.P. remembers another memory with Bobby, in which he and the Stump Kids perform a parody of ""Candy" by the band Cameo titled "His Candy." When J.P. starts playing the saxophone, the episode cuts back to the present. As much as Craig likes J.P's hair, he questions if it actually happened. Kelsey asks if J.P. even knows how to play the sax, to which he realizes that his memory did not happen, unlike the previous memories.

After the Stump Kids realise they have no memory in which Bobby played any important role, they begin crying over losing their friend, even though he is not a familiar friend to them. However, they hear Bobby dropping his candy and exit the stump to see if he is outside. They find him on the ground and at first, Kelsey thinks he is a ghost, but Craig reassures her.

They wonder why Bobby is still at the creek, and Bobby explains that he did move, into a different house. Relieved that he is not gone, the Stump Kids decide to play hide-and-seek with him. But shortly after Craig starts counting, Mackenzie enters the scene and tells Craig that Maney is stuck in quick mud, so he, Kelsey, and J.P. to go rescue her. Bobby however, is left hiding inside a bush, where he starts eating candy. He discovers that his favorite is cherry, but drops one of them. Nonetheless, he does not exit his bush in order to remain hidden. 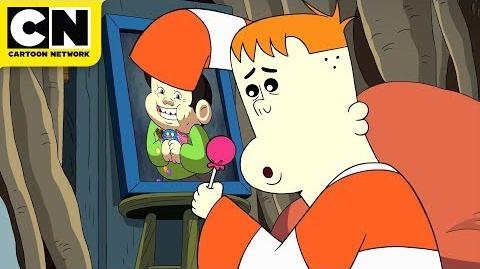