Lost in the Sewers

"Lost in the Sewers"

Craig agrees to help the Sewer Queen map the sewers, but he quickly finds himself in over his head.[1]

The episode begins with Craig, Kelsey and J.P. arriving at the sewers, but before they can enter, they are

stopped by two girls who laugh at Craig because he has bags on his feet to avoid getting wet and they are not allowed to enter. However, the Sewer Queen arrives driven by the water and greets Craig and his friends, and allows them to enter. Inside the sewers, the queen goes to her throne while Craig and his friends look at everything inside the sewers. While walking, several children ask the queen for help. When she climbs to her throne, Craig shows the queen the plans of the sewers to draw a map, and she organizes a trip inside the sewers to map it, along with Craig, Kelsey, J.P. and two Sewer Kids (Scuba and Frisboy). As they walk, J.P. talks to Frisboy (a short, hairless kid), Kelsey talks to Scuba and has another narrative sequence, and Craig talks to the queen.

Both arrive at a point where there is a fence and the queen goes to the other side climbing, but she stands on the water and is dragged by a flood, so the others go to the other side to go look for her and J.P. finds her goggles.

The group looks for the queen screaming "Marco!" and she says "Polo!" until they arrive in an area with several sewers and they don't know where to go, Craig takes the "leader" position and guides them through a random sewer he chooses. The group stops because they find two red and bright circles in the background, and think it is an animal. Craig, to look brave and like a leader,

moves forward to see what there is, but turns out to be an old can with two red metal lids. The kids keep walking and they arrive at an area where bubbles of a car wash come out, then they fall through a waterfall to a place where they can not leave, and Kelsey and J.P. begin to argue with Scuba and Frisboy. Craig dive under the water and realize that

the grid is covered by many things, and after befriending the Sewer Kids, they help him unclog the grid.

After that, another flood drags everyone, ending in the place where the Sewer Queen was, trapped under a toy car. Kelsey throws the car and saves the queen, then Craig gives her the 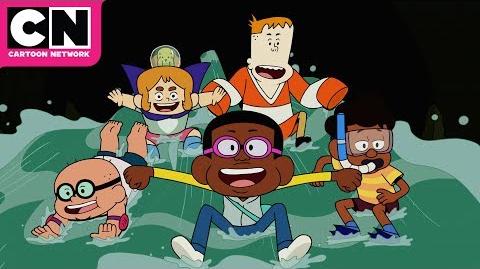 Craig of the Creek Trapped In The Sewer Cartoon Network 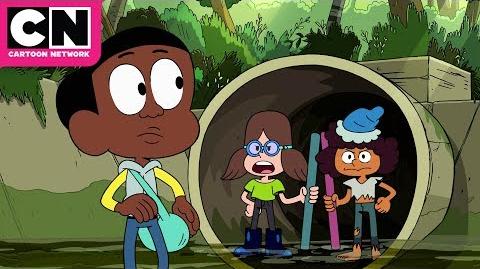 Craig of the Creek Mapping Out the Sewer Cartoon Network