Jessica Goes to the Creek

"Jessica Goes to the Creek"

When Craig and Jessica are locked out of the house, Craig has no choice but to bring his little sister to the creek.

Craig and Jessica run home from school. Craig desperately searches for his key because he wants to urinate, but he realizes he does not have it. Jessica tries to demonstrate her organization skills by showing him she had the keys, but she is unable to find them as well. Meanwhile, Craig resorts to relieving himself on the lawn. Together, they look in the window of the house, and they realize that the keys are inside the house. Jessica is disheartened because she will not be able to do her daily routine. Craig, planning on leaving Jessica outside the house, takes his spare creek clothes out of a bush and changes. Jessica reminds him that their mom and dad told Craig he had to accompany her until she got home, so Craig invites her to the Creek. She is reluctant, but Craig convinces her that she can do all her after-school activities there.

At the Creek, Kelsey wraps J.P. in a plastic sheet and charges at him with her sword, knocking him over. He exclaims that he "hardly felt it that time". Kelsey prepares to do another test, but is interrupted by Craig's arrival, where he introduces his sister. She explains that her visit was unplanned, causing J.P. to ask if she was a time-traveler stuck in a different timeline. Craig unsuccessfully attempts to tell him otherwise. The Stump Kids proceed to go off to the side to talk while Jessica rests on a rock, which she finds uncomfortable. Craig mentions that he was thinking about his enemies, causing Kelsey to monologue about how her sword made her imposing. Craig shows his friends some plans for a defense system he designed with traps for the enemies including an alarm system, a surveillance system, a distraction, and a catapult. The last idea is particularly exciting to Kelsey, although J.P. is uncertain, asking if it will turn out like their failed tin-can phone line, which was taken over by a bird as its nest. Craig reassures him by citing the time he spent designing the blueprint in math class.

Craig and his friends begin to build the trap system, starting with the alarms. Craig ties a thread with bells between two trees close to the ground to trip intruders. However, Jessica approaches Craig and becomes entangled in the trap herself while trying to ask Craig where to hang her coat and backpack. Craig tells her that she can use Kelsey's clown fighting dummy. When she goes to hang up her clothes, she approaches slowly because she finds the dummy off-putting. She throws her coat onto the dummy, then runs at it and pushes it. Meanwhile, Craig and his friends continue building the defense system, placing several mirrors on the trees in specific positions to see when the enemies are there. When they finish orienting the mirrors, Jessica calls out to Craig, wanting to watch her afternoon TV shows, so J.P. and Kelsey sit on a rock and pretend to talk about economics, although JP doesn't know what economics are, thus ending the "talk show". They manage to briefly entertain Jessica with Mortimor, then move on to continuing their defense system.

Craig rigs cardboard cutouts of basketball players to jump out at people to scare them off. Satisfied, he then begins building the catapult by pinning a tree to the ground with a hockey stick, but it does not work and the tree springs back up. He again attempts to build a catapult, this time using a rock to hammer in the stakes, but he is still unsuccessful. Jessica asks Craig about her post-school meal; Craig does not want to look for food because he's busy, but when JP says he's hungry as well, he goes with Jessica to the Trading Tree. Jessica is fascinated by Kit's business, but Craig, rushing her along, asks Kit for three Chocorolls. Jessica asks for apple slices, but since she does not have apples, Kit instead gives her an apple juice. Soon after they start walking away, the Junior Forest Scouts arrive and demand food in exchange for some rocks, but Kit does not accept rocks. Jason says he only wants three Chocorolls and Kit shows him that the last ones were taken by Craig. Jason demands that Craig give him his chocolate rolls. Craig asks why, and Jason has Tony explain, but he is unable to come up with an excuse so they admit that they're just hungry, causing Craig to deny them. He begins to walk back to the stump with Jessica, making Jason angry. Jason notices Jessica's glass and gets an idea.

Back at the stump, Craig again tries to build a catapult, but it does not work and when he gets up from the tree, it falls on J.P. Jessica asks Craig for a handkerchief, making Craig angry. He yells at her that he does not want to take care of her anymore. Jessica tears up and explains to Craig that she changed her whole day for Craig yet he's still mad at her. Guilty about what he done to his sister, Craig sits next to her on the rocks and apologizes. Their resolution is cut short when the alarm sounds. and Kelsey looks into the mirrors to see that the Junior Forest Scouts have come to the stump. J.P. activates the distraction system, which scares the scouts, who try to flee but quickly realize that J.P. was controlling the distractions, so they chase him to try to catch him. J.P. climbs up a tree to Craig, Kelsey, and Jessica where they escape using a makeshift zipline.

The skate reaches the end of the rope, knocking them off the seat into a bush next to a sidewalk in a subdivision. The kids wonder what happened to Jessica, but she pops out of the bushes and exclaims that it was fun. Craig asks if she will return to the creek the next day, which Jessica immediately turns down, ending the episode. 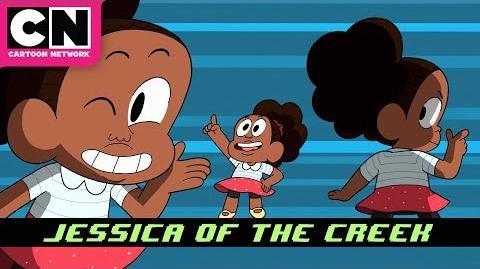 Craig of the Creek Shouting at His Little Sister Cartoon Network

Jessica Goes to the Creek