Craig of the Creek Wiki
Register
Don't have an account?
Sign In
Advertisement
in: Article stubs, Episodes, Season 2

Jacob of the Creek

"Jacob of the Creek"

A terrible haircut forces Craig to go under cover at the creek.

When Craig is about to leave his house for the creek, he runs into Bernard, whom notices that Craig has not gotten a haircut. As a result, he briefly insults him before leaving the scene. Craig's mother cannot give him a haircut because she is taking Jessica to her play rehearsal so he must wait until she gets back. Craig decides to give himself a haircut, which ends in disaster.

At the creek, Craig announces to Kelsey and J.P that it is time to do the project, to build the time machine, to which Kelsey wonders why he wants to do it now. In response, Craig takes his hood off and reveals his haircut to them, to which they burst out laughing. Although Craig wants to stay home until his hair grows back, Kelsey apologizes and convinces him to stay at the creek.

To build it, they go to the Trading Tree to get the parts for it.

Craig stays back and wears a pair of sunglasses to conceal his identity, but Kit notices him and thinks that he is a cool, new kid. To welcome him, she gives him a free Choco Roll. Paintball Mike also notices him, and asks Kit if he has decided.

Back at the Stump, the trio starts building the time machine. Paintball Mike looks for the new kid and Craig introduces himself as Jacob. Mike asks Jacob if he would like the join the Paintball Federation and gives him a paintball as a gift for Deciding Day, the day where new creek kids decide what group they are going to be part of. Jacob will think about it, but Kelsey is annoyed. However, Craig states that he is not planning on joining.

Later, Yustice of the Ninja Kids takes him to the Ninja Waterfall and gives him manga so that he will consider joining them. Once again, Kelsey is upset that he is not helping them with the project. He promises to work on it extra hard on it tomorrow.

Kelsey notices that Craig's hair still has not grown back, even after a few days have passed. Craig dismisses this before resuming work; but Jane of the Tea Timers invites him to a tea party and Eliza encourages him to join them. Jacob is leery, given that the Tea Timers have fake snacks and like to cause drama. Eliza however, argues that they now have real snacks, such a cupcake that Jacob happily takes.

Back at the Stump, Craig promises that when his hair grows back, he will assist Kelsey and J.P. in building the time machine. He asks the others to hug him, but upon doing this, they hear a buzzing sound. Kelsey reaches into his pocket and pulls out an electric clipper. She realizes that that he has been using his Jacob identity to be with the other kids. Craig explains that he benefitted from his false identity by receiving free stuff, and also explains that he did not want the others mocking him for his hair.

On Deciding Day, Jacob goes to the Trading Tree and makes his decision. He takes his sunglasses off and reveals to everyone that he is Craig. He turns his head around and reveals that he wrote Kelsey's name and J.P's name on the back of his hair. Everyone at the Trading Tree laughs at him.

Kelsey and J.P., however, appreciate that he learned his lesson before he declares that they should finish the time machine so that he does not have to learn his lesson in the first place. 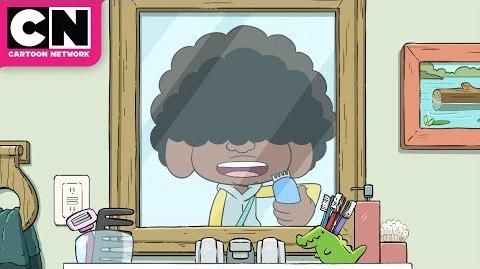