Craig’s quest to map the entire Creek takes him and his friends to the treacherous Poison Ivy Grove.

Craig lays out paper and art supplies on the dining room table to draw a map of the Creek, but just as he is starting Bernard and Alexis enter, and kick him out so they can work on their homework. Craig tries to convince them of the importance of his work, only to be ribbed for using scented markers. After that, he tries to work in the living room, but Jessica yells at him saying "Time is money, Craig!", and gives him unwarranted economic advice. Craig tries to work in their exercise room where Duane is on a stationary bike with a pedal-powered fan that blows Craig's art supplies everywhere, causing him to give up and head to the Creek.

Over at the Creek, Kelsey is training her pet budgie Mortimor using J.P. as a target. Craig says hi, and asks

what they are doing. Following Kelsey's explanation, J.P. decides not to help with Mortimor's training. J.P. points out the big empty spot at the center of the poison ivy grove, and Craig mentions no Creek Kid has ever been there. Seeing his chance to make his mark on the Creek, he goes to the Trading Tree to ask Kit for supplies, such as food and calamine lotion in case they come in contact with poison ivy. The Stump Kids fantasize about their potential status if they discovered a new area of the Creek.

J.P. advises Craig and Kelsey to not eat the poison ivy. Kit returns with the calamine lotion, and

warns them against going to the poison ivy grove, saying "when kids come out of the grove, not even their parents recognize them." They arrive at the grove, and after analyzing its size and risk, Craig attaches the fishing line to a tree to allow them to path their way out and hands the rod to J.P. As they walk through the ivy, Kelsey hits the plants with her sword, Craig contemplates the peace of the place, and J.P. reels out the fishing line. Craig reassures Kelsey following her concern about the danger of the mission, only for J.P. to get tangled in the line stuck on some foliage. A thorn punctures his suit, so Kelsey repairs it with gray tape. J.P. apologizes for being distracted by what he thought was a conch shell.

Craig looks at his map and determines that they are halfway through the ivy as they encounter a rock that they rest on. At that moment, the JP cane catches something, and when JP wants to bring it, the thread is cut. As they do not have cane, Craig mentions that they will have to be guided by emblematic places of the Stream. When they begin to hear noises and see the leaves move, they sit still

waiting for a monster to appear. Suddenly, a trunk comes out of the trees and almost hits the children. When they are thrown to the ground, the JP suit breaks and Craig and Kelsey take it out of the ivy to cure it. Kelsey thinks about removing her stomach, but Craig reminds him they have the lotion. To her bad luck, when she opens the bag the lotion is not there and Kelsey notices footprints on the ground.

The children notice that something moves between them and the three of them climb a tree, the first branch breaks and they jump to a harder one. Craig apologizes to his friends and decides that he should jump out of the tree and go for help. When Craig jumps, he bounces and falls back into the tree, taking no damage. Then the three jump from the tree and stay jumping on a trampoline, which was the one that bounced Craig. Craig was thinking of a name to mark the trampoline on the map, just when a shirtless boy arrived who was chasing them. The boy reveals that he is immune to ivy, and Kelsey tries to attack him.

his house pays attention to him. The boy gets the lotion to JP and he passes it all over his body. Craig feels sorry and marks on the map, in the area of ​​poison ivy, "DANGER, KEEP OUT!!". The child thanks him, and the Timekeeper's sousaphone sounds, signaling dinnertime. Craig, Kelsey and J.P. jump from the tree and boost the child, who then lands, rocketing the trio with a lot of power, allowing them to see the landscape of the city. The three fall abruptly in the backyard of a house, causing Kelsey to faint and Craig and J.P. groan in pain, ending the episode. 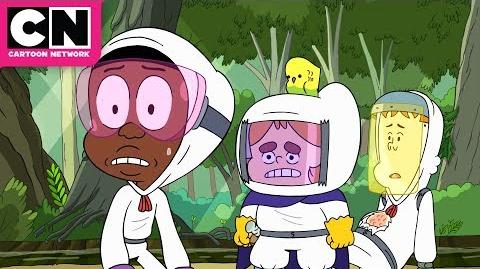 Craig of the Creek Itch to Explore Cartoon Network