Craig makes a long-distance connection with a kid that loves the creek as much as he does.[1]

In this episode, Craig loses a worksheet which is his homework while in the creek one day. He realizes this, and begins to search for his missing paper. While

looking around with Kelsey and JP, they run into the science kids which are doing experiments involving testing the pH levels of water, later revealing that they are doing this because the pH levels are low, suggesting some one is peeing in the creek. Craig asks if any of them have seen his paper.

At first they did not receive any useful info, until one science kid who is under water with a snorkel surfaces and says he thinks he saw a worksheet and reveals which direction to look it. After a brief walk, Craig

and his friends find his worksheet pinned under a rock. When Craig picks the paper up, he notices immediately that someone has completed it already, however it seems to be in a different language. While examining the paper, JP suggest that it is written in "elvish", but Kelsey recognizes the writing style as cursive. The bottom of the paper was signed by "Helen". Craig wants to thank this person for completing his work by writing a thank you and asks if they can meet

up tomorrow after school so Craig can reward her with a choco roll, likely from the trading tree.

The next day after school, Craig and friends return to the rock but do not see Helen. They do, however, find a new note. The note says that Helen had left her house immediately after school, and that her mother is a strict teacher. She also says that she is not familiar with choco rolls, but if they are anything like chocolate she would be forbidden to have one. Craig and friends think it is strange how Helen said she left from home after school, that her mother was a teacher, and that she was not allowed to have chocolate. They return to the science kids looking for answers, and once again speak to Wren. Instead of the obvious answer that Helen is home schooled, Wren says that Helen must be from an alternate universe and the rock is linking the two.

Craig and Helen continue writing notes to each other, discovering that they both love the creek and have similar landmarks, but that they are different. For example, instead of the trading tree, Helen has the

ghost tree. After more notes bounce around, Helen informs Craig that soon, she will not be able to return to the creek for about a month because of her allergies. Craig panics, not wanting to lose contact with his new friend for a whole month. With Wren's help, Craig decides to try and open a door between dimensions. They begin to construct a door way, covered in Christmas lights, and instruct Helen to return at a certain time, when a storm will be overhead, as the storm will provide "just enough" energy for the portal. Craig also tells Helen to bring a bag of goods from her world, as he will do the same, and then they can trade. Craig, JP, Kelsey, and Mortimor all add goods to the bag, and Mortimor adds a feather.

The storm comes, and they open the portal. Craig will enter, while the others will anchor him to make sure he can return. At first he does not see anyone, but the opposite door

then opens, revealing a small girl who's face is covered up by an umbrella. Helen appears to be shy and does not want to disappoint Craig. Craig then convinces her that he is already her friend, and that she should come forward. Wren soon tells Craig that he must return, just as Helen is coming closer, because the portal is about to fail. Craig asks for more time, but he must leave. As he is being pulled back onto his side, Helen throws her bag to Craig, while Craig then tosses his bag to her. The doors close, and then fall

over, while the lights turn off, signifying that the door way has been closed. They take the bag received from Helen and open it up to reveal what was inside.

The bag had a box of "sugar-free chunkies", a three ringed binder, and a friendship bracelet with half a heart on it. Craig and friends are content with the items they have received. The episode ends with the storm ceasing, and the sun is rising. JP asks if the sun shine is Helen with a message, and Kelsey says that Helen is saying hello from just one dimension away. The episode then ends with the sun shining over Craig and his friends, as they look onward into the sun rise, smiling. 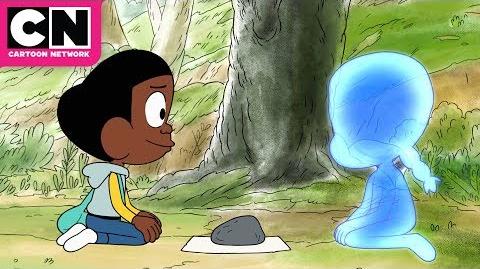 Craig of the Creek Another Creek Dimension Cartoon Network 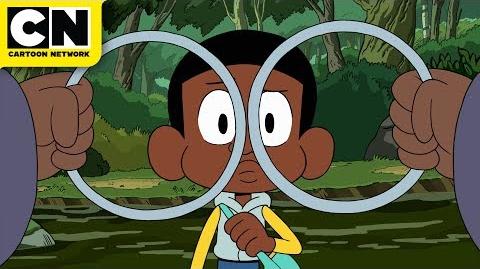