Craig of the Creek Wiki
Register
Don't have an account?
Sign In
Advertisement
in: Article stubs, Episodes, Season 1

When a kid claims dibs on the Stump, Craig has no choice but to take the kid to "dibs court".

Craig, Kelsey, and J.P. enter The Stump to find a strange kid named Richard. Richard claims the stump belongs to him because he called dibs. Craig consults The Elders of the Creek who explain that 'dibs' or 'minesies' (as it is known in certain parts of western Pennsylvania) is an ancient decree of ownership and that anyone may claim anything by calling dibs. Elder Mark mentions that Craig could make a claim in Dibs Court. A session of Dibs Court begins and Elder Mark presides as the Lawful Neutral Judge. Craig makes his case with evidence and calls Kelsey and J.P. as witnesses but each point gets countered by Richard who simply states that he called dibs. The jury finds for Richard. As Craig, Kelsey, and J.P. are moving out of The Stump Craig notices the sign which reads "Keep Out J.P." and this is inspected by Elder Mark who proclaims it follows the Finders Keepers Ruling of 1986 and that J.P. is therefore the rightful owner of The Stump. Even so, J.P. is still forbidden from opening the secret door. 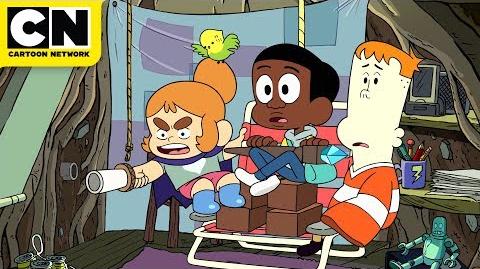