Bring Out Your Beast

"Bring Out Your Beast"

Craig wants to play a popular card game, so he decides to borrow Bernard's vintage and valuable cards. A rare card is lost, and Craig has to get it back.[2]

Craig was there was that he wanted to ask Bernard for his Bring Out Your Beast game because everyone is playing it in the Creek, but he does not give them to him. However, Craig does not give up and goes to Bernard's room to look for the game.

The scene cuts to the "Splintery Butt" which is where everyone plays Bring Out Your Beast. Turner and Mark

face each other in a game, while everyone watches and shouts. Mark ends up winning and Turner falls off. Craig shows his friends the cards he found in Bernard's closet, and then Craig offers to play with a

kid he finds in that place. Craig only plays random cards that he likes or finds and the other kid plays well, until Craig uses the "Beast Snare" card that takes off all the cards and, in addition, the other player keeps them.

Craig ends up winning and the boy runs away shouting that Craig has that card, Turner listens to him and walks to Craig to explain how that card works, and convince him to throw it away. Craig, his

friends and Turner go to the entrance of the Splintery Butt, Craig places the card on a birthday card, then he buries it under a rock and thanks Turner for warning him, then he goes home, while Turner laughs. Later, when Craig was washing the dishes, Bernard appears and gets angry with Craig because he took his cards and also the Beast Snare has disappeared. Those cards had value for Bernard because he would sell them and so he could pay for his college.

Craig takes Bernard to the Creek to look for the card, but when they raise the rock, they find that the card is no longer there, and in the Splintery Butt there is smoke and

screams are heard, so they go in there to see what happens. Kelsey and J.P. run to Craig to tell him that Turner took the card they buried and has beaten all the players she challenged, including Mark who was the best. She asks who wants to play now, and Craig sits in front of Turner, but he realizes he did not bring cards. However, Bernard appears with his cards and sits next to

Craig to play with him, while several kids watch. The game starts normally, and Craig and Bernard manage to take off some "life" from Turner. Alexis arrives and joins the group of kids who watch. Turner activates the "Beast Snare" card and takes a lot of their cards.

Bernard tries to tell Craig that it does not matter if they lose, and mentions that it is just a game of reading the cards. With that last thing, Craig brings out a card that takes off the life of the player who gets it, and gives it to Turner. She was going to take it just like any other card, but she reads what the

card says and loses the game, mentioning that it was good to be the best. All the other kids celebrate, including Alexis. Craig hands Bernard the card he took, but Bernard gives him all the cards of the game so he can play whenever he wants. Alexis congratulates Bernard and Craig, saying they play very well. Bernard says that in his time he was the best, ending the episode. 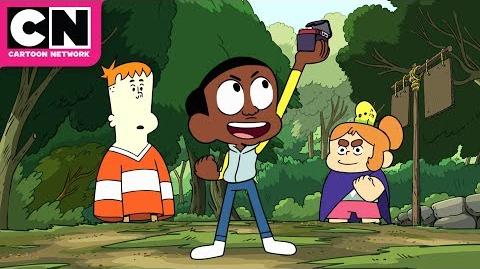 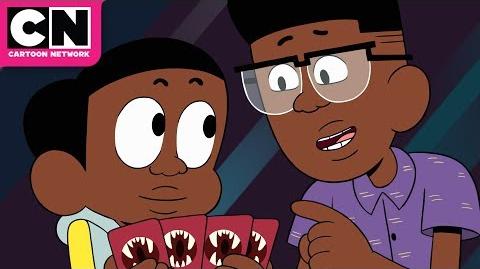 Craig of the Creek Craig and Bernard Team Up Cartoon Network

Craig of the Creek The Ultimate Evil Card Cartoon Network