"Alone Quest" is the 40th and final episode of the first season of Craig of the Creek and the 40th episode overall.

Craig has an emergency, leaving Kelsey alone at the Stump.

Craig, Kelsey and JP are playing Charades in the Stump. JP's turn is currently happening, and he tries to hold his breath while Kelsey and Craig try to get what he's doing. Craig's turn is next, but as Craig is about to act out a memory, his stomach begins to hurt and then it becomes clear why: Craig needs to poop!. However, Kelsey and JP think he's trying to act a memory, while he clenches his butt to try and hold it in. He is too embarrassed to tell them about his current situation, and then they get the idea, with Kelsey saying "Why not Craig" then JP says "I think, it's because Craig has to.." but Craig cuts him off before he can say "poop". JP decides to go with Craig to his house, leaving Kelsey and Mortimor alone at the Stump. As soon as they leave, Kelsey lets out a fart that echoes in the creek which displeases Mortimor and said "oh come on, it's not that bad."

Kelsey then decides that now that Craig and J.P are out, she can finally finish her novel, Robyn and the Snow Sword. She begins to talk to herself by both characters, fighting and acting, and then decides to take a break telling Mortimor that she loves writing.

Meanwhile, Craig and JP make it to JP's house, but they find that the front door is locked. JP tells Craig that he keeps a spare key in the bush, and goes to look for it. Craig, trying hard to not worry about his bathroom situation, starts to get annoyed. JP then suggests that they can only hope to go through the side door, which is unlocked but there is a spider on the door handle. Craig stomach rumbles again, so JP tries to get the

spider off the handle, but is unsuccessful. Craig decides to grab the rake and take care of it himself, but he too gets scared of the spider, and Craig realizes that he still needs to go, and JP signals him and they both run out of the driveway, going to Craig's house.

Back at the Creek, Kelsey has taken off her shoes and is sitting near a river, using a wet rock to sharpen her sword. She gets done with it, and then puts her shoes back on, then hears a noise. It turns out to be a squirrel, who throws leaves down at Kelsey, who hits them with her sword. She begins to joyfully run around, then rolls around into the meadow field, then lands with Mortimor who gets hungry.

Craig and JP have made it to Craig's house, when Craig realizes that he left his keys at the Stump. Then he stops for a second and realizes "the crumbles are getting closer together" which means that his poop is close to coming out into his pants. Jessica then comes to the door, and tells the two that Bernard is studying, and that he told Jessica not to open the door for strangers, and she tells Craig to show credentials. Craig tells Jessica the following things: Her birthday is May 3rd, She loves her small doll, she can't blow her nose on her own, and she can't drink juice before bed otherwise she'll have an accident. Jessica annoyed that Craig had told her dirty business to JP, decides to open the door. However, she can't figure out which is the lock, which make Craig realize that it's almost out and that he needs a bathroom immediately. Craig then knows that their only one more place he can go, but it's weird: Kelsey's House. They take off, now knowing that Jessica had found the lock and opened the door.

Meanwhile, Kelsey and Mortimor then find a garden containing bird seed. But then see that it contains a squirrel shield, which means a girl shield. They nearly get there and before they snag the Bird seed, the sprinkler comes on making the two roll to a fence, making Kelsey clench her butt. The sprinkle nearly hits them, and goes to the other side. Instead of going in stealthy, they cause a ruckus making the seeds go all over the grass.

Craig and JP then go to Kelsey's House, where her dad answers the door. He is surprised to see Craig and JP without Kelsey, and he gets worries. Craig's limit it up, and it's now or never, Mr. Pokoly gets surprised at Craig, and then Craig confidently says "I HAVE TO POOP". Mr. Pokoly, trying to be disgusted, breathes and lets Craig inside to let him use the downstairs bathroom, which Craig thanks him for. JP also asks to use the bathroom, but Mr. Pokoly, knowing how rowdy JP can be, tells JP to do it in the bushes.

Kelsey and Mortimor head back to the stump, where Kelsey finishes "Robyn and the Snow Sword". She then sits there with an obese Mortimor. Suddenly, she hears JP and Craig come back through the bushes. Kelsey is happy to see the duo, and Craig confidently says he was pooping. JP then retails everything Kelsey did today, while Kelsey tries to figure out how JP knew all that. 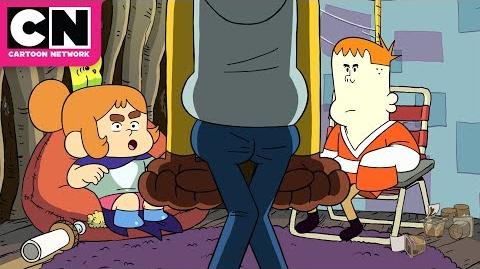